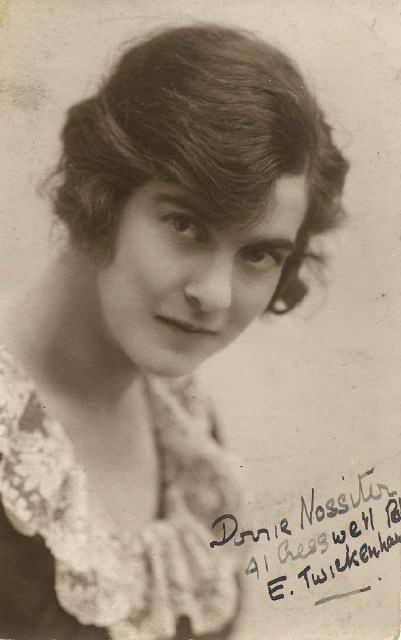 A lot of Dorrie’s pieces come from this period of her work and are recognised by the jewellery boxes bearing this address. For example the Fire Opal ring in a box showing Dorrie’s business address Lissenden Gardens from 1929 - 1941, Photograph courtesy of Tadema Gallery. 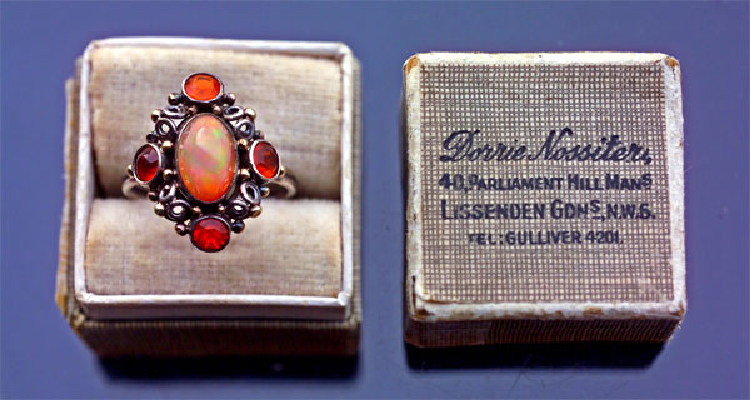 “When I worked at the Bank of England, from the age of 16, in Temple Row Birmingham I would often go down to London for weekends. Dorrie would phone me at work “Dear heart,” this was one of her favourite sayings, ‘I’ve booked theatre tickets for us all’. All being Geoff, herself, me and sometimes Uncle Sam or other friends. “Bring your evening dress and Geoffery will meet you off the train at Paddington.” It was no problem recognising Uncle Geoff (Major Hill). He was at least 6” taller than most of the people at the platform with a battered old trilby set at a rakish angle. Failing that I just watched amongst the crowds for a large pair of feet with no socks on and he would swoop down hug me and take my cases and into the Taxi even though Elm Mews, Notting Hill Gate was only 5 minutes away.

This was a wonderful opportunity to see Dorrie’s new designs which she and King who did all the setting would ask for my opinion. There were certain combinations of stone colours and textures which I preferred and much to Dorrie’s amusement was not afraid to express an opinion.

There was something so exciting about dressing up in an evening dress and of course to borrow a necklace or clips. One of my favourite dresses and Dorrie’s was a Royal Blue off the shoulder dress. Dorrie wore black a great deal and it showed off her jewellery to perfection. My very favourite was the ear clip which covered and followed the curve of her ear. Dorrie would sweep her hair back from her face. Geoffery would need help with his tie and then we would all climb into ‘Lady Violet’, Geoffery’s old Bentley, and off to the theatre. We would sweep up to the entrance and a doorman and helper would take the car keys and park the car and bring it round after the performance.

Then back to Elm Mews or made dash down to Riverbank, where Kathleen, the housekeeper, would have everything ready. But Dorrie always insisted on cooking and serving up the meal with help (evening dress etc) with large pinnies. What time we all went to bed I can’t remember but Saturday morning Geoffery would knock on my bedroom door and call “Come into our room for mornings Jeannie”. Somehow the sun always seemed to be shining over the garden the papers arrived and we would scan the financial times to see how the shares were doing or if Dorrie had sold more jewellery it was suggestions as to what to invest in of course heated fun discussions followed. Dorrie and Geoffery’s decisions were final and Dorrie’s stockbroker Kirkham made the buys or sales. This would be followed up during another visit and appraisal of who had been right.

I can well remember the excitement when Dorrie was asked to make a necklace for the film Cleopatra it was all in Topaz where this is today I know not! Uncle Sam was Dorrie’s husband. Her fiancé died of tuberculosis after the First World War. Dorrie met him during her time nursing as a VAD. She met Uncle Sam who was a lot older than Dorrie and when she met and fell in love with Uncle Geoff, Major Hill, Uncle Sam understood and they stayed married as the marriage settlement that provided for Dorrie remained until her Death. Although she could have married Uncle Geoff they never felt the need they were so content together. Dorrie’s great sadness was that she had no children. It just didn’t happen and in those days fertility treatment didn’t exist.”