Dorrie Nossiter’s jewellery designs with their origin in naturalistic forms from plants and flowers are characteristic of the Arts and Crafts Movement. The dates given for Arts and Crafts vary with some excluding or including Art Nouveau (Jugenstil) and Art Deco. It is however recognised that the Arts & Crafts tradition in British jewellery although having specific periods of focus, like that from 1895 - 1910, have never really gone away. Whereas some authors and researchers try to tie down art periods to specific dates with Arts & Crafts and even Art Deco I do not believe this possible and can lead to a straitjacketed view of art and design development. 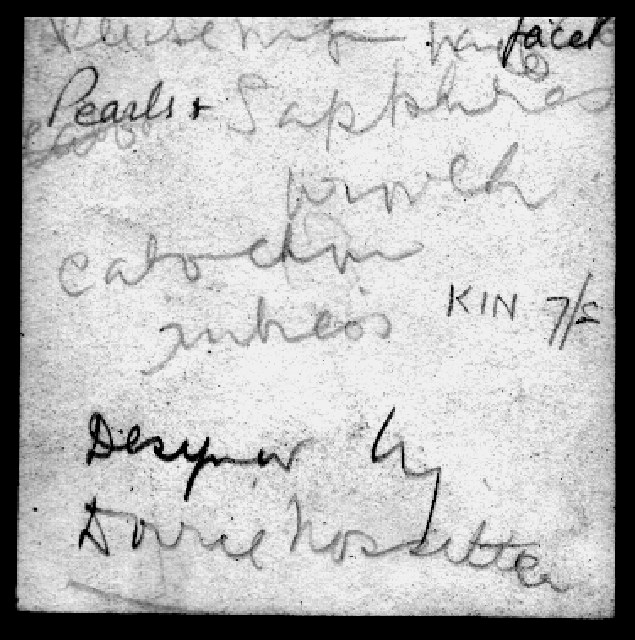 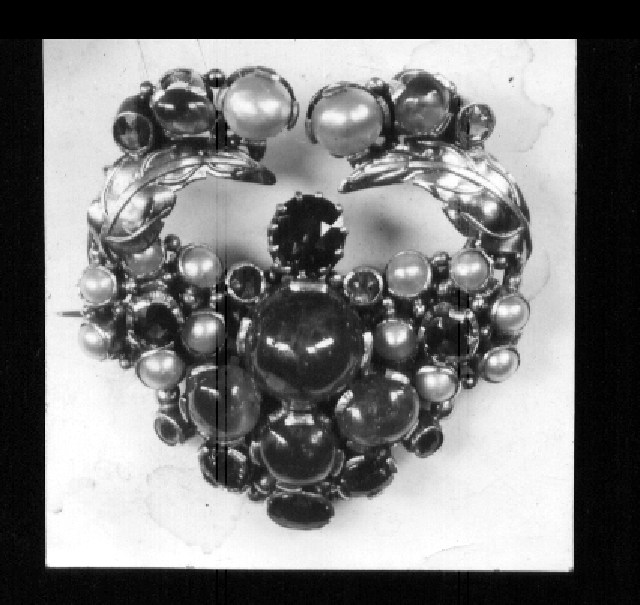 +
Photograph of a brooch.
Following a designers development and ideas over a period of time without detailed records is not an easy task. This difficulty is exemplified with the number of previously incorrect dates on jewellery dealers websites, auction details and books about jewellery design. We do have several of Dorrie’s original designs as ideas and sketches on paper and the corresponding piece of jewellery or comments on the backs of photographs, as above. Unfortunately the family archive of material, see figure below is very limited and so my research has been limited into the family pieces that can definitely be identified as by Dorrie, oral history from Jeanne, Dorrie's niece and recorded information in published sources. 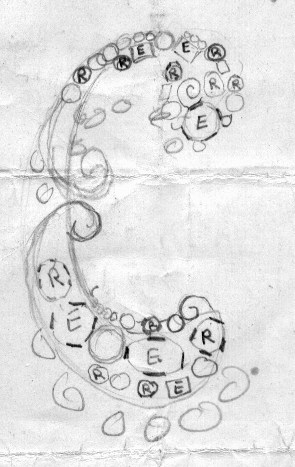 +
Design drawing for earrings to cover the whole ear. 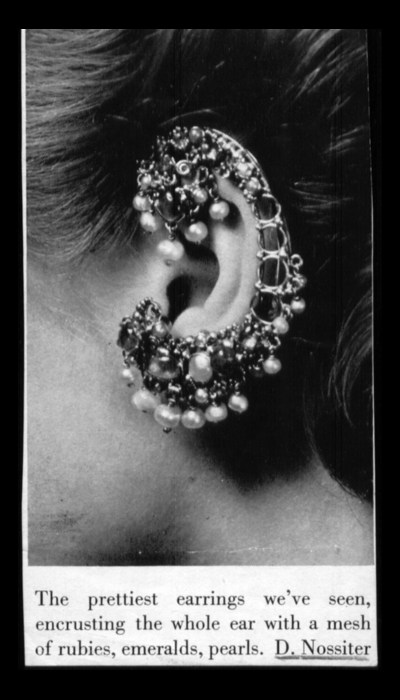 +
Newsclipping photograph of the finished piece. "The prettiest earrings we've seen, encrusting the whole ear with a mesh of rubies, emeralds, pearls. D.Nossiter"
As my background is very much medical and photographic with an emphasis on medical history I have found the lack of easy access to journals and information about Art & Design rather disconcerting. I can happily trawl for hours through early copies of Index Medicus and find their related articles in journals with relative ease and I am usually overwhlemed with information not grasping for snippets, this is not the case in the world of jewllery design.

Jewellery Designs like many others go in and out of fashion and in the ‘History of Art and Design’ writers have at times been predjudiced against certain styles of work.


“Obviously the war years saw little advance in either design or technique, and ideas, such as they were, were drawn from the staider elements of thirties design. The jewels of Dorrie Nossiter had more in common with an earlier Arts and Crafts tradition than with any new emergent style. Her designs rely almost entirely upon the colours of the gems with which they are set for their effect, chromatic harmonies and contrasts rather than shapes and textures (Plate 96). The stones sit in light clawsettings-topazes, pearls, haematites, peridots and amethysts clustered in cheerful agglomerations-earrings that curl right around the ear with pearl drops trembling below, or fan-shaped clips for wearing on the cuff of a short sleeve.” (Hinks 1983 p110).


This change was commented upon by Scarisbrick in 1993


“Whereas the Art Nouveau style on the continent was a spent force by 1914, the British Craft Revival proved a much hardier plant, perhaps because it was so strongly rooted in ideology. It flourished for several more decades, withthe emergence of Sybil Dunlop, George Hunt and Dorrie Nossiter. Then it revived again with a tremendous wave of enthusiasm in the 1960’s, fostered by Goldsmith’s Hall and the Diamonds International Awards organized by De Beers.” (Scarisbrick D 1993 p196)