Refers to Sybil Dunlop on page 132 "Some British designers however, like Sybil Dunlop, Harold Stabler and H.G. Murphy, known primarily for their Arts and Crafts-style pieces, produced decidedly moderne (though not geometric) jewels."

However, neither of these pieces of jewellery should have been attributed to Sybil they are pieces by Dorrie Nossiter, also contrary to the comment about the Tassel pendant below Sybil Dunlop's workshop ran until the late 1960s (Hinks P 1983). 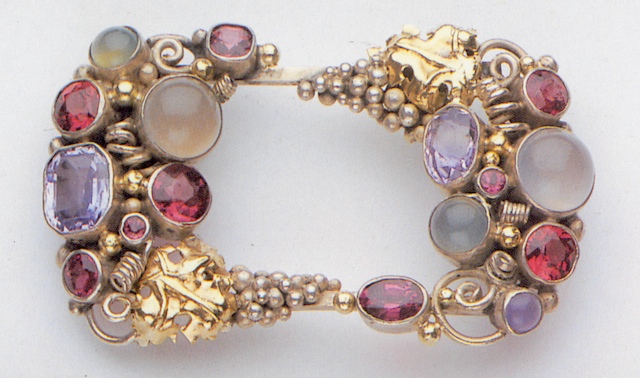 Page 125 "The long career of Scottish-born Sybil Dunlop began in the early 20th century and lasted until the late 1930s. Out of her studio-shop in Kensington Church Street in London came a plethora of handsome jewels, all hand-fashioned in the Arts and Crafts vein, but the later pieces tinged with Dunlop's unique brand of modernism. This brooch probably of the 1920s, features rich masses of silver, silver-gilt, stones and paste amid the leafy, beaded clusters and coiled tendrils common to early Arts and Crafts goldsmith's work." 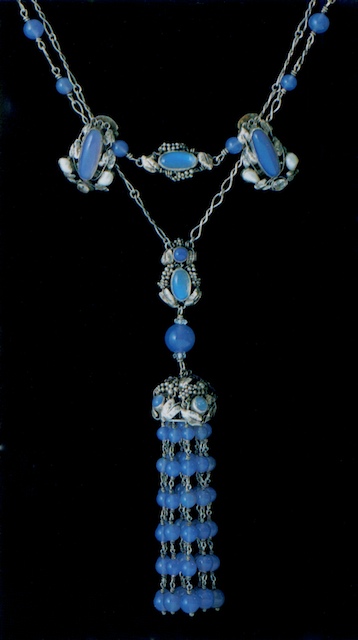 Page 133 "The Scottish-born Londoner Sybil Dunlop, many of whose hand-crafted jewels reflect her Arts and Crafts training, created most of her pieces in the Art Deco era. The long 1930s necklace, with tassel pendant and two matching clips, is indeed rife with Arts and Crafts materials and motifs - silver, chrysoprase, moonstone, leafy clusters, coiling wires - but its extreme length, moderne style and beaded tassel are very much of the Jazz Age.