Why do we need to be concerned about reappraisal and misattribution? This is very much a need I recognised when looking in several books and websites towards putting together a few web pages about Dorrie before it became a full website. Having had the copyright of my own photographs stolen it became clear that Dorrie’s life work as a Jewellery Designer was being overlooked with work that I could clearly see was by her being attributed to Sybil Dunlop (1889 - 1964) a designer from the Glasgow School working at the same time as Dorrie. 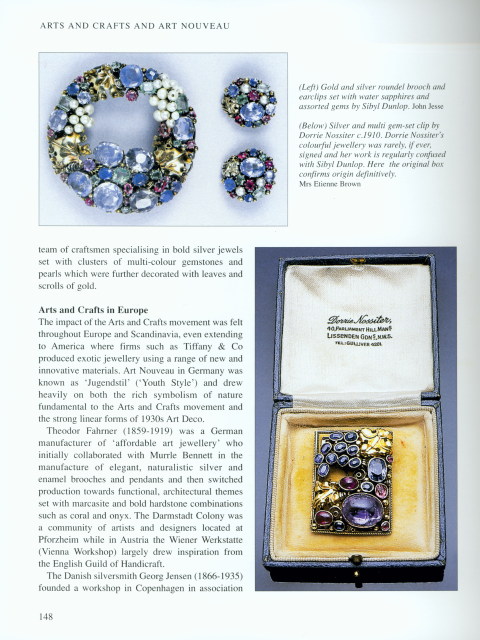 +
Example of correct and incorrect attribution of jewellery, from Benjamin's 2003 publication.
The real trouble with the extent of the misattribution is that the style of Dorrie’s designs is being seen as that of Sybil Dunlop’s so more and more jewellery is attributed to Sybil Dunlop as it has become ‘her style’ not Dorrie’s. As a designer Sybil Dunlop covered a much broader range than Dorrie with her work including silver spoons, boxes and cups as well as jewellery with many pieces being symmetrical in form, including enamelling and not so closely based around flower and plant forms as Dorrie’s work.

Another contrast was that Dorrie only worked with two setters for her jewellery, the King brothers, whereas Sybil Dunlop employed a number of craftsmen (Hinks 1983). The stylistic elements of Arts and Crafts jewellery connect them to individual designers as stated by Becker in 1987


“One interesting point about these jewellers and trying to recognise their styles is their use of different kinds of leaves. . . . The leaf motif was the connecting theme throughout Arts & Crafts jewellery. Really the only way of learning about differenht leaves is to look at as many pieces as possible - with experience and time it may be possible to use the leaves as a kind of makers mark.” (Becker V 1987 p 236)


It is interesting to note that Hinks talked to Nathanson who managed Sybil Dunlop’s workshop and ran the firm until his retirement in 1971 and he rejects the style of work that is now being wrongly attributed to Sybil Dunlop,


“W. Nathanson joined her right at the beginning in the early twenties, a lad of sixteen fresh from John Cass, and his contribution to the firm and the style which it evolved was a vital one. Today the designs usually associated with Sybil Dunlop are the stylized leaves and tight wire scrolls of the later Arts and Crafts movement. Nathanson rejects this ‘leaf and bead work’ as being early and untypical.” (Hinks 1983 p84)